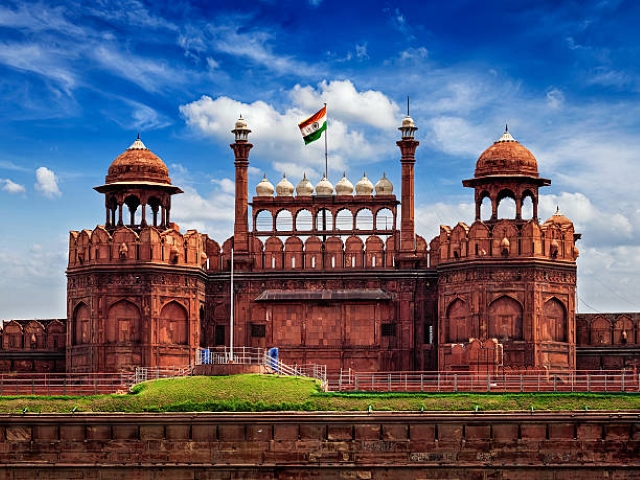 The Red Fort also goes by the name the Agra Fort. It is a massive 16th-century red sandstone castle built on the Yamuna River in Agra. That is in west-central Uttar Pradesh, North-Central India.

It was the principal home of the Mughal emperors until 1638. In that year the capital relocated from Agra to Delhi. Such is its importance, the Red Fort is a UNESCO World Heritage site. As a result of being only 2.5 kilometers away from its more prominent sister monument, the Taj Mahal, the Red Fort is often on the visiting card of those visiting the area.

Why is the Red Fort so famous?

The Fort’s architecture reflects the three great dynasties. Since ancient times, this Fort eminates pride, might and durability. It mimics the opulent lifestyle of the Mughals. Moreover they used high-end materials in its construction such as Belgian glass and fine sandstone. 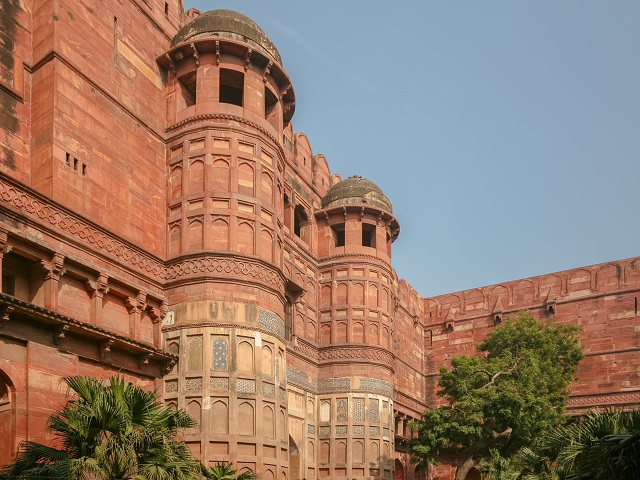 Gates and Walls of the Red Fort

Using red sandstone as its main component, it has a massive 2 kilometer circumference. As a semi-circle fort, its foundation is in the Yamuna riverside. The wall is erected at a 70 feet height to prevent intruders from entering. In addition the Fort has four gates, the most famous of which are Lahore Gate and Delhi Gate.

Hauz-I-Jehangir, a magnificent monument carved from a single stone, stands in frtont of the Jehangir Palace. In the past, this Palace was a bathing place. Then as you travel east, you will come upon Shah Jahan’s house, Khas Mahal. This comprises of a pool and a marble pavilion, with views of the Taj Mahal.

The Mathamman Burj, an octagonal tower, stands to the north. It is the location of Shah Jahan’s imprisonment, with its many underground tubes and tunnels. Consequently during a battle, this defensive structure had its own escape route. The most visible tunnel links the Red Fort to the Yamuna River.

How to Get to the Red Fort?

The Kheria airport in Agra primarily serves as a military installation. It’s a seasonal commercial airport with Air India flights from New Delhi. The flight from Delhi to Agra takes a little over an hour. Agra is located on the Delhi-Mumbai and Delhi-Chennai routes and is well linked to the majority of Indian cities. Regular trains go to Agra from towns like Delhi, Jaipur, Gwalior, and Jhansi.

It will just take 15 minutes to get to Red Fort from the Agra Railway Station. This location is easily accessible by bus, vehicle, or rickshaw from anywhere in Agra.

When is the Best Time to Visit the Red Fort?

Throughout the year, Red Fort is a famous beauty. The Fort has a total size of 380,000 square meters to cover. From October to March is the optimum time. Being the winter months, the weather will be pleasant for a visit to it. Aside from that, owing to the bright skies, one can see the famed Taj Mahal perspective.

Book a Holiday Houseboy, your friendly local tour guide, to get the most out of your visit to Agra. Always alert for your safety and welfare, a Holiday Houseboy will show you not only the famous sites but places off the beaten track not normally visited by tourists. To book one in Agra, please click here.

Our other destinations in India are Darjeeling, Jaipur, Kerala, Mumbai, New Delhi and Siliguri.