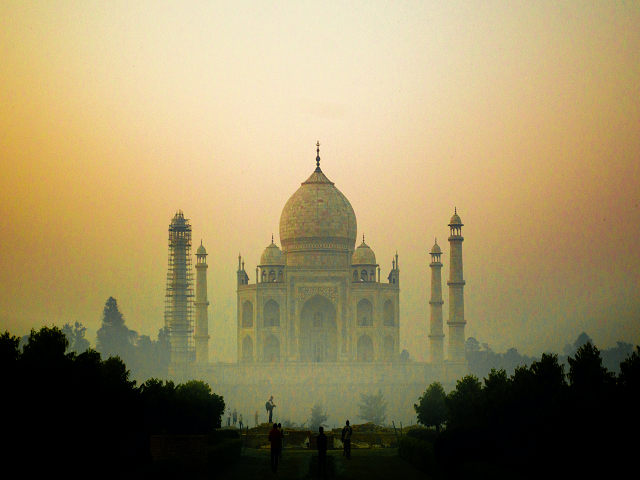 Agra is a city belonging to India’s Uttar Pradesh. This is one of the cities of the Golden Triangle, alongside Delhi and Jaipur. Agra used to be the capital city of the Mughals. Agra is home to the UNESCO World Heritage Site, one of the seven world wonders, and the most admired piece of art around the world, the Taj Mahal. You can also find the Great Mosque, Iʿtimād al-Dawlah’s tomb, and Akbar’s tomb here close to the Taj Mahal. Also don’t forget to visit the Red Fort whilst you are in the area.

Agra’s economy relies majorly upon tourism. There are many religious and cultural festivals held here. The city is surrounded by the Agra Canal and the Yamuna River. Some of the major crops you can see here are wheat, barley, and cotton. In the city, you can find many different types of bazaars, monuments, architectural sites, luxurious malls, hotels, and so much more.
The most common city that tourists first go to in order to reach Agra is New Delhi. Agra is about 200 kilometers away from New Delhi and the transportation methods one can use are plenty. Here are some of the available options for you as a tourist.

You can take an Air India flight from New Delhi to Agra. This is the only domestic flight that can be used to reach Agra from New Delhi. It will cost you between INR 2000 and INR 2500 and the flight takes less than an hour to reach Agra.

• The Gantimaan Express – this is known to be the fastest train from New Delhi to Agra. It will cost you less than INR 2000 for a first-class ticket and will take a bit more than an hour and a half to reach Agra.

• The New Delhi Habibganj Shatabdi Express – this is said to be the first train to leave from New Delhi to Agra. This train will take you about two hours to reach Agra.

• The Taj Express Super-Fast train – this is one of the cheaper options which will cost around INR 100 for a second-class ticket. These trains are also available at most times during the day compared to the other options.

Your journey on the bus will take more than 3 hours on the Taj Express Highway. There is also a faster bus which will take a bit more than 2 hours to reach Agra. You get both A/C and non-A/C options. The price ranges from INR 200 to INR 2000 based on the bus type and the season.

A Holiday Houseboy is a gay friendly tour guide who looks after your safety, welfare and interests at all times. He looks out for you on all occasions to ensure you have a trouble free experience. To see who the Holiday Houseboys are in Agra, please click on the “Guide Info” button below.

We also have Holiday Houseboys in New Delhi too.

Our other destinations in India are Darjeeling, Jaipur, Kerala, Mumbai and Siliguri.