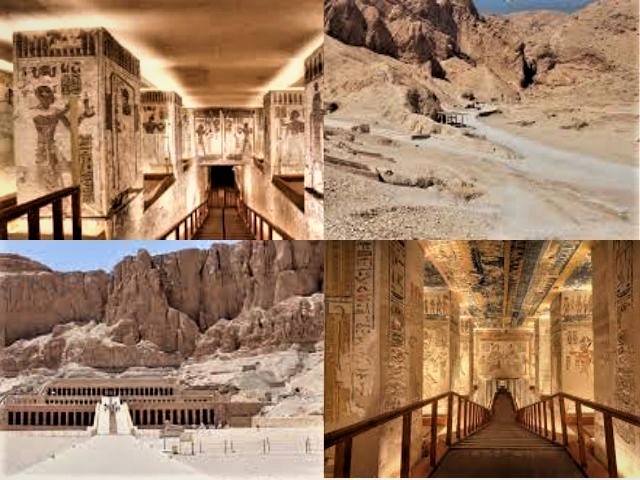 Luxor Egypt is the historic city of Thebes. As a result of being close to the Nile River’s source, it goes by the name of Upper Egypt. Apart from the Pyramids of Giza on the outskirts of Cairo, Luxor is the epicenter of Egypt’s tourism sector.

Luxor is also the starting point for the ever-popular Nile cruises.

But don’t miss the most famous necropolis of ancient Thebes. Where you may locate the tombs of pharaohs like Tutankhamun, Ramses II, Ramses III, Set I, and queens like Nefertari.

Valley of the Kings in Luxor Egypt

The principle attraction is the tombs of the pharaohs. Magnificently designed they still bewitch you today with their beauty. In addition their conservation is amazing despite being thousands of years old.

The ancient Egyptians erected massive public monuments honoring their pharaohs. Moreover they also spent considerable time and money building secret underground mausoleums. To such an extent that the valley near Luxor became a royal burial place for pharaohs. Such as Tutankhamun, Seti I, and Ramses II during Egypt’s New Kingdom (1539-1075 B.C.).

The tombs show extensive preparations for the afterlife. They used mummification to keep the corpse preserved so that the deceased’s eternal spirit might reanimate it in the hereafter.

The underground tombs had all the material possessions that a king would want in the next world. Treasures, like the golden masks with King Tut, are spectacular!

In this desolate valley with little vegetation, there are more than 60 tombs. But only a few are accessible to the public. Pay an additional fee to visit the tombs of Ramses V and VI (KV9), Seti I (KV17), and, of course, Tutankhamun (KV62). Don’t miss these up!

Valley of the Queens

Nefertari Meritmut, the first of Ramesses the Great’s Royal Wives, was one of Egypt’s most well-known queens. Nefertari’s tomb is undeniably the largest and most magnificent in the valley. If the admission charge is prohibitively expensive, the tomb of Amunherkhepshef is also well worth a visit for its well-preserved reliefs.
While on a Nile trip from Luxor to Aswan, see the magnificent Valley of the Kings and Queens!

Book A Holiday Houseboy, Your Gay Friendly Tour Guide, for Inside Knowledge

The best way to tour around Luxor is with a local tour guide. Our local Holiday Houseboys in Luxor are professional tour guides. Their knowledge is amazing and their testimonials speak for themselves. Book a Holiday Houseboy in Luxor by clicking on this Luxor destination page.